skip to main | skip to sidebar

If the spay, neuter and microchip incentive program is approved by the City Council tonight, Surf City would be the first in O.C. to require that cats be licensed.

HUNTINGTON BEACH - The City Council is set to vote Monday on an incentive program intended to encourage residents to spay, neuter and microchip their cats and dogs.

But included in the proposal is a new law that is making some cat lovers hiss.

If the program is approved, Huntington Beach would be the first Orange County city to require felines to be licensed.

The incentive program has evolved from a 10-month struggle at City Hall over Councilman Keith Bohr's proposal for a mandatory spay, neuter and microchip program. At a heated council meeting in November, then-Councilwoman Debbie Cook suggested the incentive program as a compromise.

Los Angeles County and Sacramento have similar cat-licensing laws, and on Friday the Los Angeles City Council voted to require spaying or neutering for dogs and cats.

While the proposal to license felines six months and older has frustrated some, others say it could cure Huntington's cat overpopulation problem.

"It is really a two-pronged benefit," Bohr said. "It will increase awareness of the pet population and encourage residents to have their cat spayed or neutered."

But Save Our Strays, one of the most vocal supporters of Bohr's mandatory program, said the latest version of the ordinance is unrealistic.

"Frankly, I think it is completely unenforceable," Karen Chepeka, president of Save Our Strays, said about compulsory cat licensing. "Dogs will bark but if people keep their cats indoors, you hardly know they are there.''

Orange County Animal Control Services, which licenses most of the county's dogs, already has a voluntary program for cats that charges $5 per license. The number of cats in the program was unavailable Friday.

Animal control will wait for the City Council to finalize the new program before it plans for a potential wave of cat licensing requests, he said.

From mandatory to incentive

Councilman Don Hansen has expressed support for the incentive program.

"I think it is a great compromise and solution that eliminates the mandatory nature (of the law) and gives them the comfort of not having to alter their animals," he said.

The incentives would be added to the $72 discount county animal control already gives dog owners who spay or neuter their pets. Under Huntington's system, a dog would need to be sterilized and microchipped to get the full discount.

Bohr said the new proposal is a step in the right direction, but some of his previous supporters say they still want a mandatory program.

"It sounds like they are moving forward but frankly I am really disappointed about the way it turned out," Chepeka said.

OCRegister
Posted by Lost Cats in HB at 3:38 PM 4 comments:

What do you do if you find a cat or dog? Chances are it is lost and the owner may be out searching for that animal. Below are a few tips on what to do when you find a lost pet or stray animal.

- If the pet has an identification collar, contact the owner.
- Check the neighborhood for lost pet flyers.
- Put up found pet flyers.
- Place an ad in the local news paper stating that you have found a pet. Don't give a full description of the pet, you want to make sure that the owner can indentify the pet you have found.
- Call your local Animal Services if you see a lost or stray animal. Lost or stray pets are often confused and scared. They are in danger of being injured or hit by a car. If you find a lost pet, please bring the animal into the shelter and advise them where the animal was found. Often when you turn in a lost animal, you are given the first opportunity to adopt the animal if the owner does not claim it.
- Post found pet ads (and search the lost pet ads) on lost and found pet web sites such as Petfinder, Pets911, LostandFoundPets.biz, etc.

For more advice on what to do, ask your local Animal Services and Veterinarian Offices. Search the internet, there are many sites on what to do if you find a lost pet. Also, more and more pet owners are creating lost pet websites and MySpace pages as well.

When a family pet goes missing it can be devastating. To help in their search, many people post flyers and turn to classified ads. But now, thanks to one local teenager, those who are missing their animals have another option - a national website devoted entirely to lost and found pets.

Since '06, LostandFoundpets.biz has provided 100% FREE Classified Ads for lost and found pets across the country.

LostandFoundPets.biz
www.myspace.com/lostandfoundpets
Posted by Lost Cats in HB at 9:05 AM 8 comments:

Our cats are missing: Lost in Huntington Beach from the Californian Apartments on Warner Ave (between Springdale St. and Edwards St.)

Female Gray Tabby: Kitty Girl is a petite Gray Tabby Cat with white paws and white neck. She is 4.5 years old and weighs 6.5 lbs, she's spayed and still has her claws. Her collar was not on her when she got out of the apartment. She's very sweet and loving. She's an indoor cat and she has feline asthma!

Male Russian Blue: Ashes is a stocky Russian Blue Cat (Solid Gray). He is almost 7 years old and weighs 13 lbs, he's neutered and still has his claws. His collar was not on him when he got out of the apartment. He's very sweet, but pretty shy. He's an indoor cat and is not used to the outdoors at all. I'm sure he's really scared!

If you live in Orange County: (especially in HB)

Please spread the word to all your friends that live close to the area! Hopefully someone has seen them.

We love them very much and are frantically looking for them!!

See images and read more about them at: 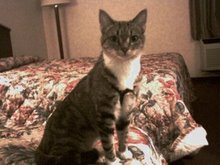 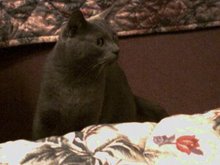